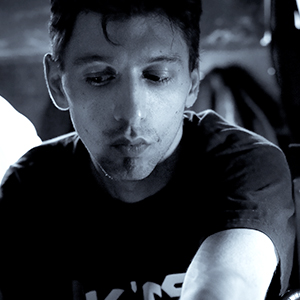 The whole thing started off in 2006 with his first turntables, first records, and first mixes.

Along unremitting work and several encounters, he becomes quickly a member of the team « La Communauté Du Son » thanks to his determination. There, his improvement in the Djing grows deeper.

One thing leading to another, a place of resident on the web radio ParisOne Reverse will create « Vjtonus » and « Mouvance Expérimentale », two broadcasts with an eccentric concept, whose only goal is the sharing and love of music.

In 2008, with his sidekick Tom Joyce and he creates Kick’n’Fat!

After several performances in various places in Paris, but also all over France and in Berlin, Germany, he has turned towards musical production, carried away by his influcences in deep, tech-house and minimal.

Today, the label 96kHz Productions welcomes him with the signature of his first track « Room 69″ in collaboration with Iz Carter, on the compilation ‘1rst Floor’.

But this is only the beginning…