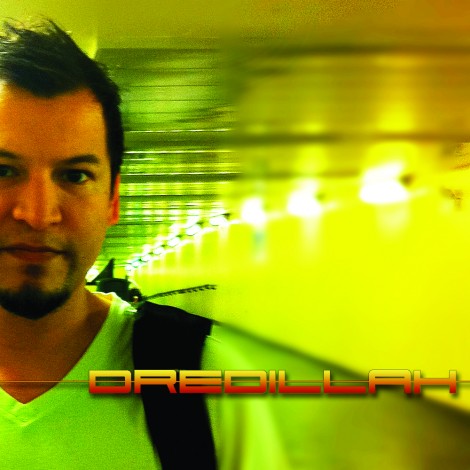 Dredillah is the drum and bass solo effort of Chicago scene veteran and A New January frontman, Andre F. No stranger to the music scene, Andre has performed with and contributed to such bands as Breather, Comasoft, Flutter, and A New January, among others.

The Dredillah project began as an animation project about a dinosaur with an obsession for electronic music. From there, Andre armed himself with a laptop, iPhone, Kaoss Pad, and a few synthesizers and VSTi’s to bring his electro-dinosaur to life. Dredillah might best be described as the love child of Moby and Goldie.

Dredillah’s first release, a 7-track EP titled, “Lunar Powered,” is primarily focused in the drum and bass genre while also incorporating elements of electro, house and dubstep to keep things interesting. Dredillah’s contributing artists and guests on Lunar Powered include Christine Ingaldson of Flutter, Ugene Ludeka, Lord Reotch, and Shawn Murphy. Keep an eye out for Dredillah… this is only the beginning.

After a few one-off collaborations, and remixes released via Soundcloud Dre dropped “Tonight” in July 2013. Weighing in at a healthy 8 tracks the “Tonight” EP is a fresh collection of bass music focusing primarily on the drum and bass genre with two dubstep tracks thrown in for good measure. Rather than bringing the typical drum and bass format, Dredillah offers his own mix by blending a liberal amount of DnB inspired production with traditional verse/chorus style song structures. In the spirit of artist collaboration Dredillah introduces new guest vocalist “Lisa VonH”, spoken word artist “Druid Rain”, and longtime friend and production pal “Flutter”. Although each track is a standalone independent piece, the music all flows together to form one cohesive theme, coming full circle with the closing track “burning memory”, a rare treat, that includes vocal performances from Dre’s ex-bandmates. The deluxe version of “Tonight” includes lyrics, songwriter notes, and song specific art.

The future of Dredillah’s Drum and Bass journey is well underway, new material includes exploring the darker side of DnB, jungle, remixes and collaborations. Most remixes are posted on his soundcloud, as free downloads. Dre will occasionally slip in one of his unreleased tracks in to his DJ mixes posted on mixcloud.

With a daily commute of two hours of many of the parts for the upcoming releases were composed on ipad and laptop. The actual mix down and production takes place in Dredillah’s home studio using Cubase or Pro- tools on a multiple OS windows 7/Vista/XP HP core desktop, with lots of coffee via French press