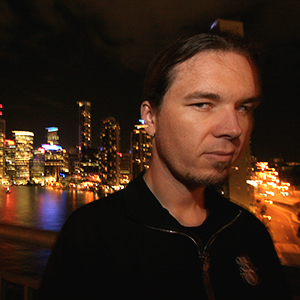 Australian based producer resistor, has been creating his own brand of electronic music for over ten years. Starting out playing guitar & bass in the early 90’s he soon caught the breakbeat bug and started to piece together his own studio. His style is hard to class, as he prides himself in capturing elements from all corners of the sonic spectrum, from all forms of broken beat goodness to metal, and hip hop flavours, all bases are covered.

Not one to care too much about trends or traditional song structure, resistor pushes the boundaries and blurs the lines of genre and style by taking the best elements smashing them together to create his own trademark sound.

Also a DJ, and live performer, he has also been involved in running and promoting many club nights over the years in his hometown of Brisbane, and has held a residency (02-07) at the Empire Hotel, one of Australia’s leading breaks clubs.

During this time he has had the pleasure of supporting such names as GrooveDiggers, Tayo,Nubreed, Chris Carter, Hyper, Smithmonger, Rogue Element and JHz to name a few.