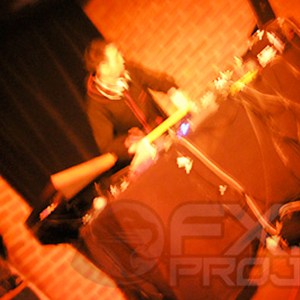 Everything started with a drum kit bought in 1992…
Mainly influenced by groups mixing acoustic and electro sounds such as PAPA BRITTLE, PRODIGY, FREESTYLERS to name just a few, but also by varied styles from metal to hip hop, along with his brother Iksel, he started the group BAD JOKE in 1996, where he played drums, but also arranging and sampling. (Album Hors Beat en 2001).

After spending several years with the group, he decided to go solo, setting up the FX PROJEKT.

In 2003-2004, he worked with the neo metal group MULSAINE (Synthtizer et Samples). During which time he also worked on his own album project. In 2008, he released his first solo album AGE OF CONTEST, strongly influenced by groups such as Break and Big Beat, with Mc HofmannX, Mc Fonz, Mc Lokass, Mc Polyglock, Mc Kopsy featuring.
FX has also featured on stage with the bands:

Since April 2007, he offers an Electro/Break book and makes increasingly NU BREAK oriented productions. He is currently working on a new book and a video clip.